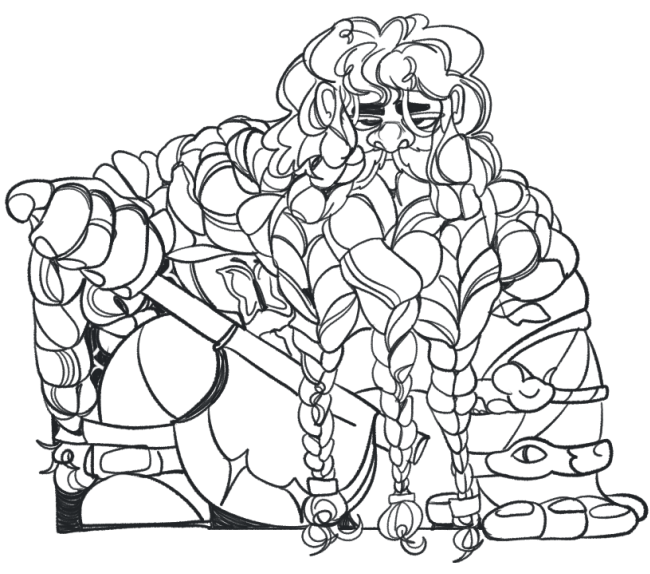 "So times were pleasant for the people there

Until finally one, a fiend out of hell,

Began to work his evil in the world.

Grendel was the name of the grim demon

Haunting the marches, marauding round the heath

And the desolate fens; he had dwelt for a time

In misery among the banished monsters,

Cain’s clan, whom the creator had outlawed

And condemned as outcasts."

"Then an old harrower of the dark

Happened to find the hoard open,

The burning one who hunts out barrows,

The slick-skinned dragon, threatening the night sky with

Streamers of fire. People on the farms

Are in dread of him. He is driven to hunt out

through age-long vigils, though to little avail."

Sir Gawain and the Green Knight

"A fearful form appeared, framed in the door:

A mountain of a man, immeasurably high,

A hulk of a human from head top hips,

So long and thick in his loins and his limbs

I should genuinely judge him to be a half giant,

Or a most massive man, the mightiest of mortals.

But handsome, too, like any horseman worth his horse,

For despite the bulk and brawn of his body

His stomach and waist were slender and sleek.

In fact in all features he was finely formed it seemed.

No soul has ever seen

A knight of such kind-

"And the horse: every hair was green, from hoof to mane.

A steed of pure green stock.

Each snort and shudder strained

The hand-stitched bridle, but

His rider had him reined."

"Aware that the man was wafting a weapon

The hog’s hairs stood on end, and it’s howling grunt

Made the fellows there fear for their master’s fate.

Then the boar burst forward, bounded at the lord,

So that the beast and hunter both went bundling"

"A white doe on the green grass appeared to me, with two golden horns, between two rivers, in the shade of a laurel, when the sun was rising in the unripe season.

Her look was so sweet and proud that to follow her I left every task, like the miser who as he seeks treasure sweetens his trouble with delight.

"Let no one touch me," she bore written with diamonds and topazes around her lovely neck. “It has pleased my Caesar to make me free."

And the sun had already turned at midday; my eyes were tired by looking but not sated, when I fell into the water, and she disappeared."

"The soote season, that bud and bloom forth brings,

With green hath clad the hill and eke the vale.

The nightingale with feathers new she sings;

The turtle to her make hath told her tale.

Summer is come, for every spray now springs.

The hart hath hung his old head on the pale;

The buck in brake his winter coat he flings;

The adder all her slough away she slings;

The busy bee her honey now she mings."

"Come unto these yellow sands,

And then take hands:

Foot it featly here and there;

And, sweet sprites, the burthen bear.

The strain of strutting chanticleer


"But they'll nor pinch,

Fright me with urchin--shows, pitch me i' the mire,

Nor lead me, like a firebrand, in the dark

Out of my way, unless he bid 'em; but

For every trifle are they set upon me;

Sometime like apes that mow and chatter at me

Lie tumbling in my barefoot way and mount

Their pricks at my footfall; sometime am I

All wound with adders who with cloven tongues

Do hiss me into madness."

"As whom the fables name of monstrous size,

Titanian, or Earth-born, that warred on Jove,

Briareos or Typhon, whom the den

By ancient Tarsus held, or that sea-beast

Leviathan, which God in all his works

"Our mother Eve, who tasted of the tree,

Giving to Adam what she held most dear,

Was simply good, and had no power to see;

The after-coming harm did not appear:

The subtle serpent that our sex betrayed

Before our fall so sure a plot had laid."