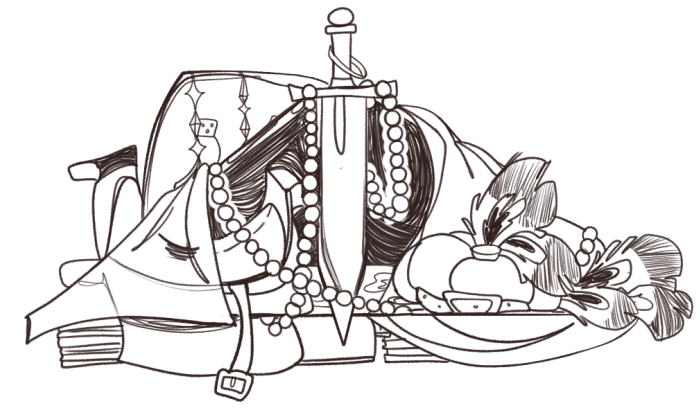 "Then he saw a blade that boded well,

A sword in her armory, an ancient heirloom

From the days of the giants, an ideal weapon,

One that any warrior would envy,

But so huge and heavy of itself

Only Beowulf could wield it in battle."

By the thought of glory, the war-king threw

His whole strength behind a sword stroke

And connected with the skull. And Naegling snapped.

Let him down in the fight. It was never his fortune

To be helped in combat by the cutting edge

Of weapons made of iron. When he wielded a sword,

No matter how blooded and hard-edged the blade,

His hand was too strong, the stroke he eadlt

(I have heard) would ruin it. He would reap no advantage"

Sir Gawain and the Green Knight

"In all vestments he revealed himself veritably verdant!

From his belt hooks and buckle to the baubles and gems

Arrayed so richly around his costume

And donning the saddle, stitched onto silk.

All the details of his dress are difficult to describe,

Embroidered as it was with butterflies and birds,

Green beads emblazoned on a background of gold.”

"For the body that is bound within this green belt,

As long as it is buckled robustly about him,

Will be safe against anyone who seeks to strike him,

And all the slyness on earth wouldn’t see him slain."

"And He was clad in cote and hood of greene.

A paire of bedes, gauded all with greene,

And Theron heeng a brooch of gold ful sheene,

On which there was first written a crowned A,

And after, Amor vincit omnia."

"With diverse flowres he daintily was deckt,

And strowed round about, and by his side

A mighty Mazer bowle of wine was set,

As if it had to him bene sacrifide;

Wherewith all new-come guests he gratifide:

So did he eke Sir Guyon passing by:

But he his hidle curtesie defied,

And overthrew his bowle disdainfully;

And broke his staffe, with which he charmed semblants sly."

"Master of this design, did give us, with

Which since have steaded much; so, of his gentleness,

Knowing I loved my books, he furnish'd me

From mine own library with volumes that

I prize above my dukedom."

That our garments, being, as they were, drenched in

the sea, hold notwithstanding their freshness and

glosses, being rather new-dyed than stained with

If but one of his pockets could speak, would it not

Ay, or very falsely pocket up his report

Methinks our garments are now as fresh as when we

put them on first in Afric, at the marriage of

the king's fair daughter Claribel to the King of Tunis.